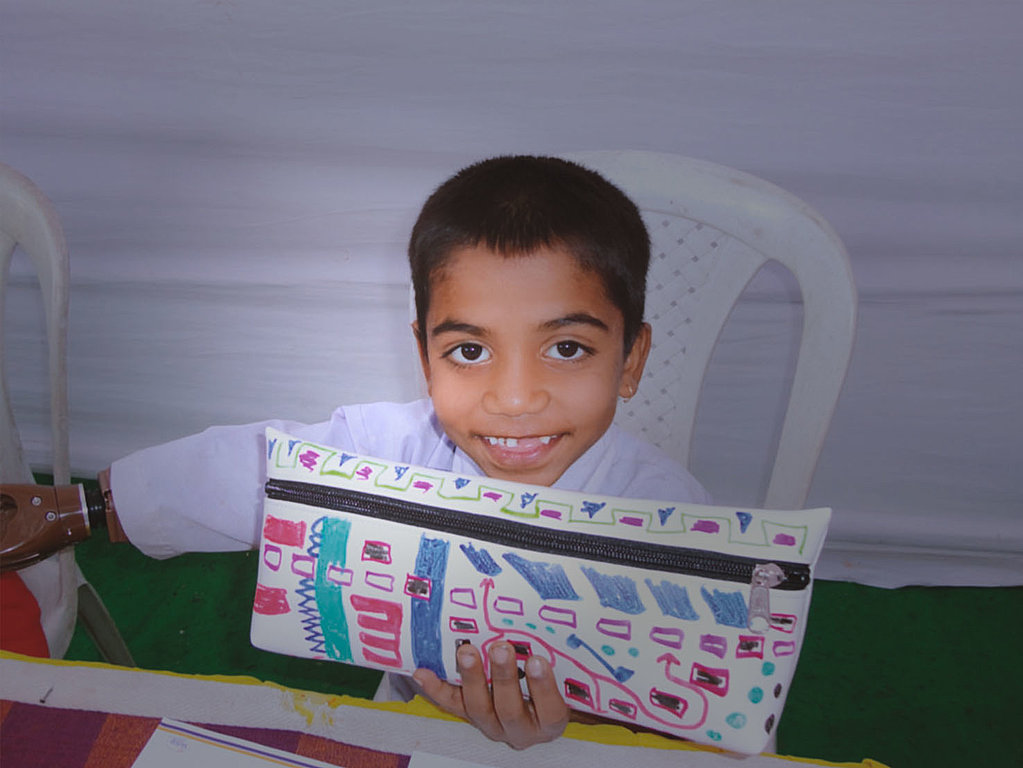 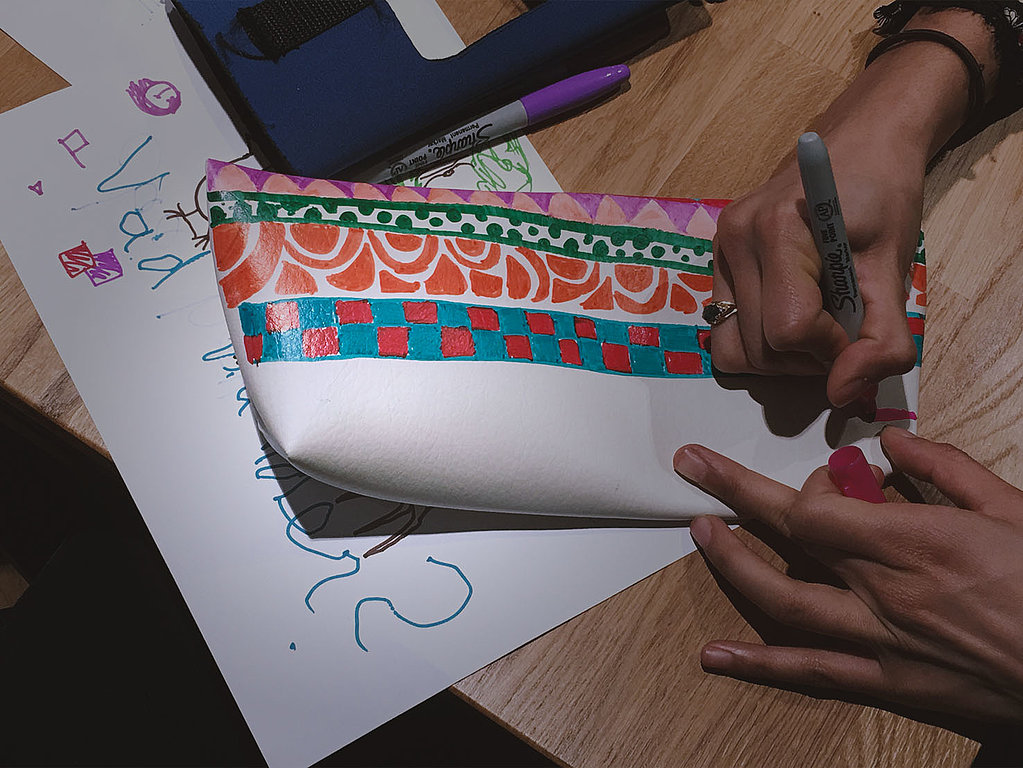 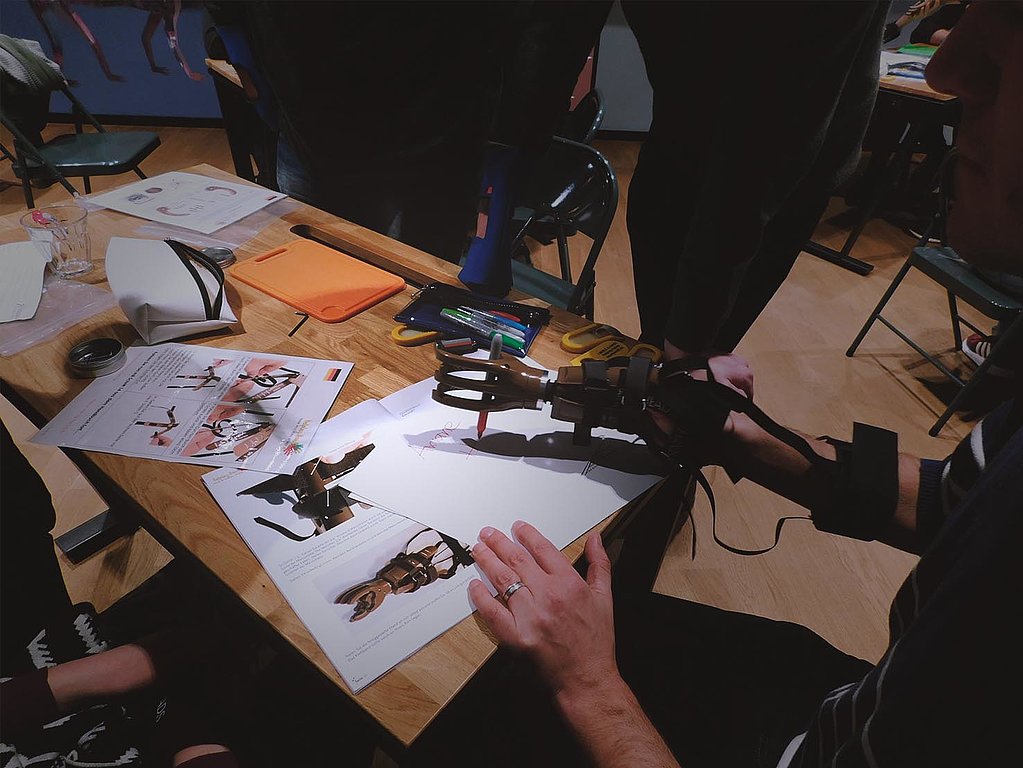 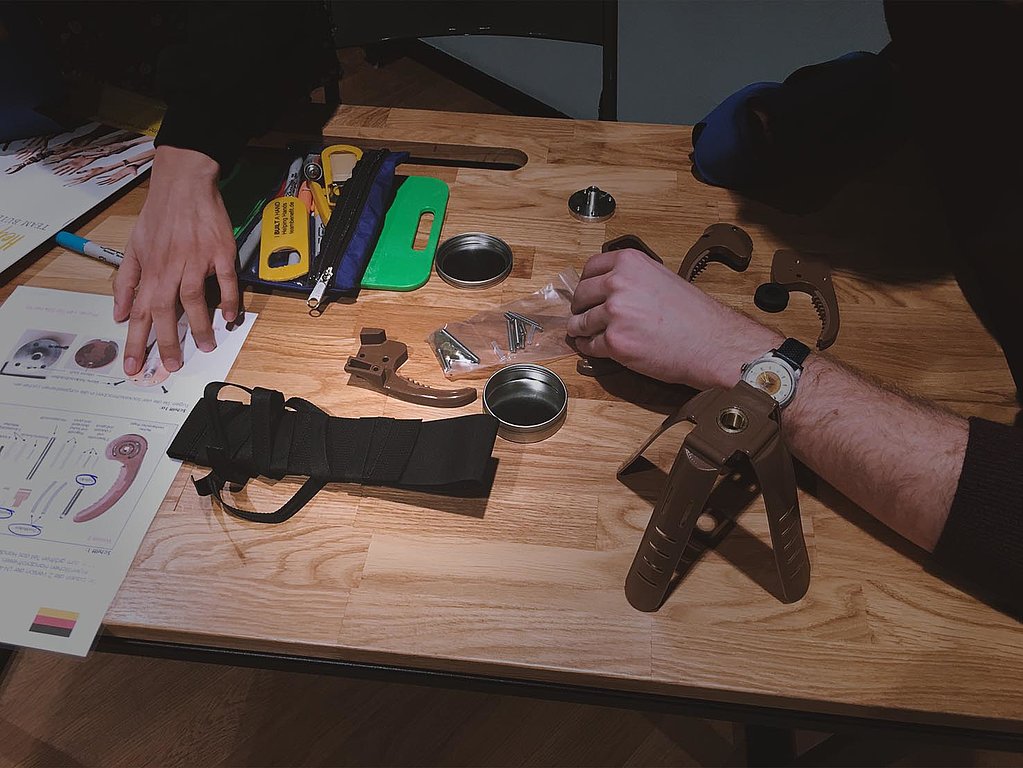 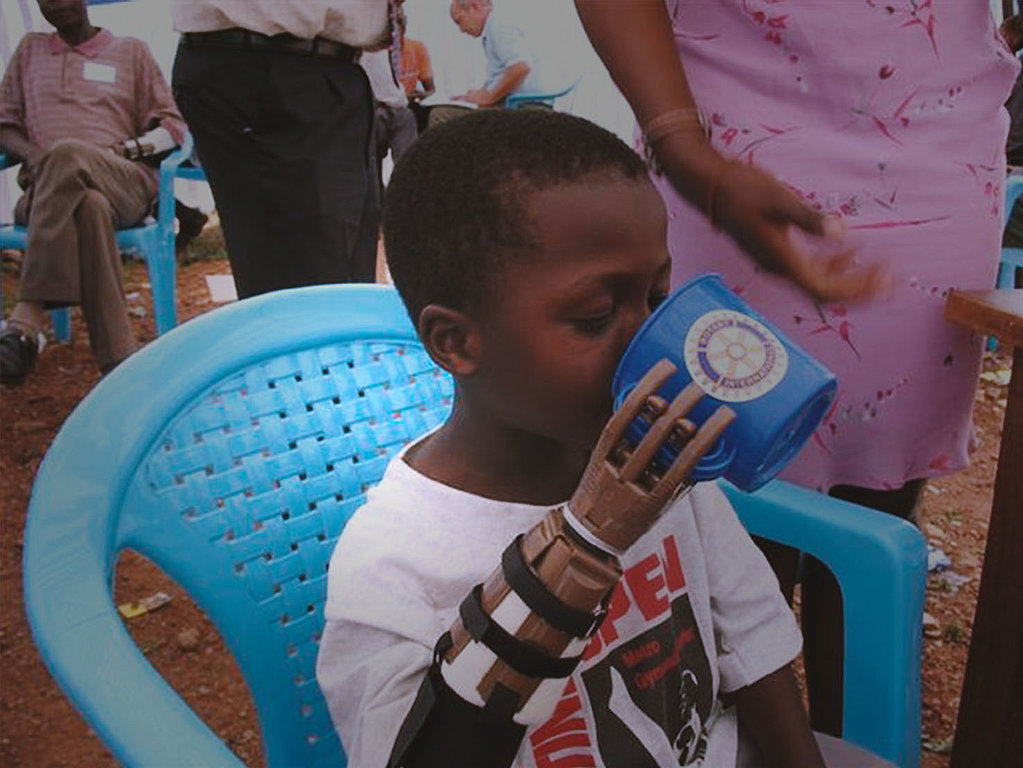 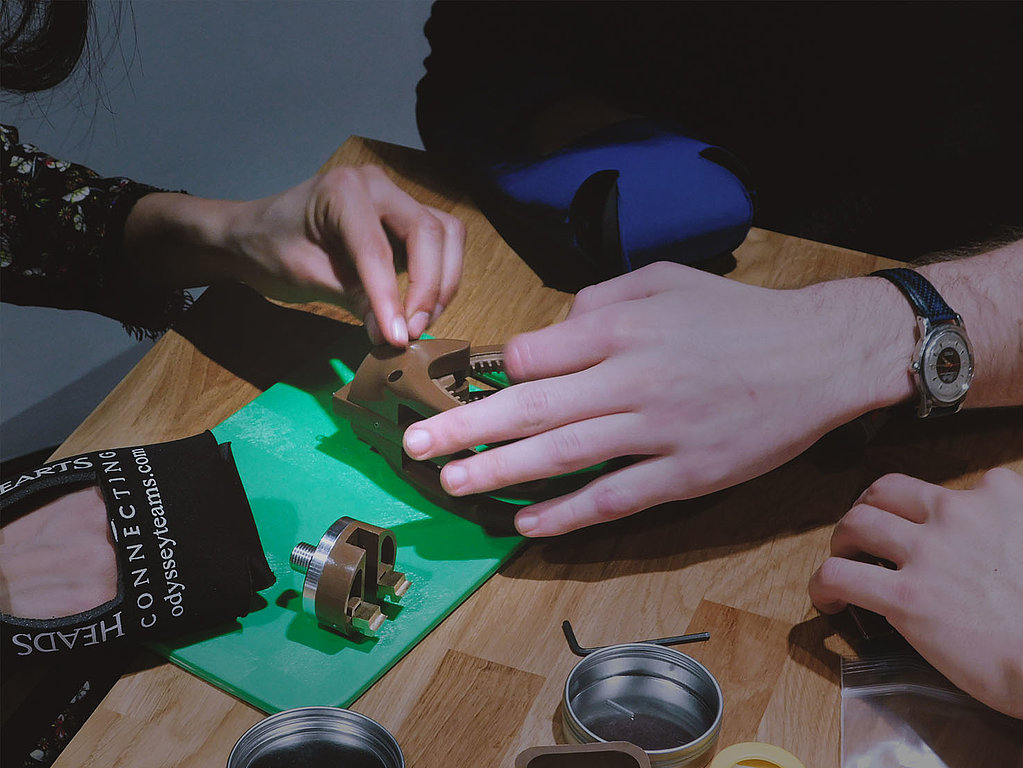 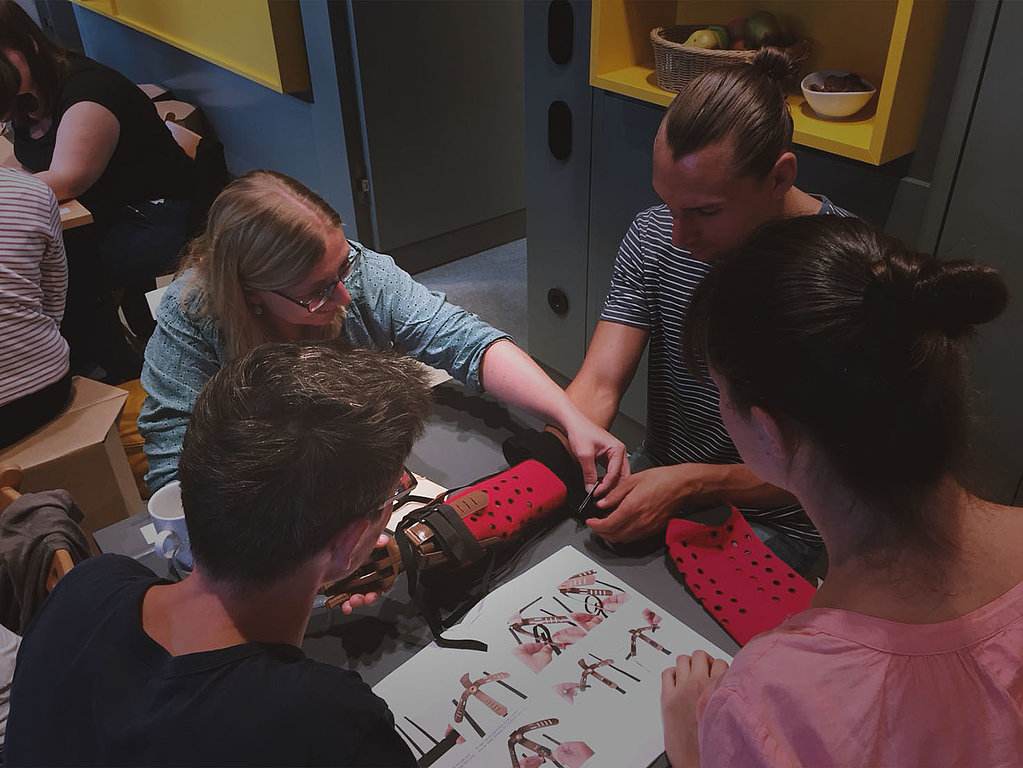 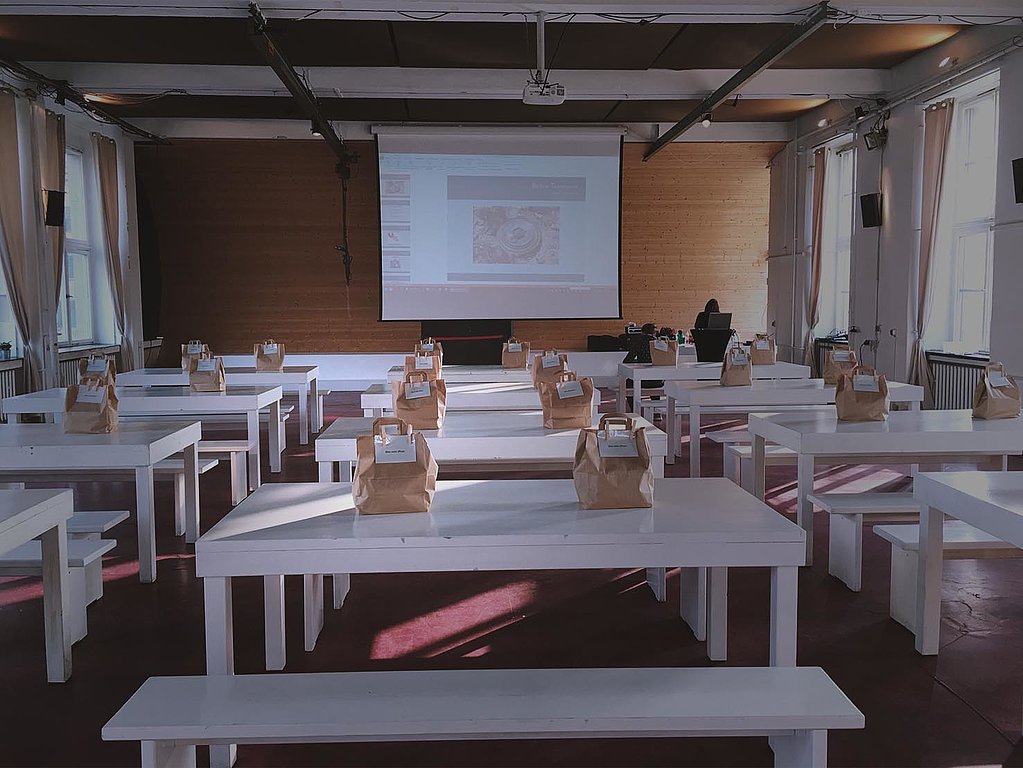 flexible, adaptable to your agenda
usually 2 to 2.5 hours of activity

can be done anywhere throughout Germany

The Helping Hands programme is a unique combination of a team building activity and charity work. In small teams of around four people, the participants assemble real prosthetic hands for landmine victims.

These prosthetic hands are donated to landmine victims in developing countries. A simple and robust mechanism allows them to pick up and carry objects and even to write – thereby enabling them to reintegrate into “normal life” and to live much more independently than they otherwise could without the artificial limb.

By doing the Helping Hands event the participants experience an intensive team building experience, and are also given the opportunity to significantly improve somebody’s quality of life as well.

The course of the event

At the beginning of the event, a surprise awaits: no one knows what is planned. Team building is on the programme. On the tables, the participants find neutral-looking paper bags with the indication that these should not be opened without explicit request.

As part of a projector-based presentation, our project manager then unravels the puzzle (The event is, of course, also possible without this surprise element): the task is to build real prosthetic hands in small teams of four people, which are then donated to landmine victims.  Additionally, the participants receive an overview of the background of this charity event.

Each team receives a kit with manufacturing instructions. Each participant also uses a special glove for his/her dominant hand (left-handed or right-handed), which deprives them of the ability of gripping. Thus, a close cooperation between the team members is necessary during assembly, the participants experience how restrictive a disability is and can better understand how valuable a prosthetic hand is for the person for whom it is being made.

During the assembly, our project manager serves as a help desk and will be available to answer any questions participants may have.

After successful assembly, each team individually designs the case in which the hand prosthesis is later handed over to the recipient. We also take a photo of the team with the case, which we attach to the prosthesis, so that the recipient is able to see who made the prosthesis for them.

When all teams have assembled the prostheses, decorated the cases and written a short letter to the recipient, the event ends with a video presentation with impressions of a so-called fitting day. On fitting days, those who are affected receive a prosthesis. Finally, we show photos of some of the recipients and tell their story in order to give an impression of what happens to a completed prosthesis.

A kit costs 250 Euros (these costs are included in the above mentioned price). This covers not only the production costs and the further development of hand prostheses by the LN4 Foundation, but also the logistics costs, in particular national and international freight costs, as well as the organisational activities of Odyssey Teams Incorporated.

We charge a supplement for our organisational effort and for personnel expenses and therefore ask for the above mentioned price of 99 Euros per person.

In 1997, 122 countries decided to abandon the use of anti-personnel landmines. Since then, the number of victims has fallen significantly. However, millions of landmines still exist in current and former crisis areas. More than 60 countries are affected, particularly Afghanistan, Angola, Syria, Ukraine, Cambodia, Vietnam, Bosnia and Herzegovina. Estimates suggest that at least 500,000 people have lost limbs or their eyesight due to landmines and are in need of life-long support. However, this is a support that they often do not receive, because of the lack of health and social systems as we know them.

The LN4 Foundation was founded by Ernie and Mari Meadows in memory of their daughter Ellen Meadows, who suffered a fatal accident at the age of 18.

The purpose of the foundation is to produce a hand prosthesis that is simple and robust to use, in addition to being maintenance-free, making it suitable for use in developing countries. This prosthesis will be free, meaning a direct donation to the recipients, often victims of landmines, who cannot afford costly prostheses.

The prostheses change the lives of those affected sustainably and grant them a much more independent life. Compared to cash, food and many other donations in kind, it is certain that these prosthetic hands will genuinely benefit those affected, and that no black market is created.

To date, more than 30,000 hand prostheses have been assembled within the framework of team events. Starting from the USA, where the idea arose, the concept spread to other countries including Australia, New Zealand, England, and now Germany, where the first events were held in autumn 2016.

Who is involved - the logistics chain

As part of the implementation of the Helping Hands team building idea, non-profit as well as profit-oriented private-sector organisations work together. To be more precise, the logistics chain looks like this: